Who Will Be the Hero That Saves the SS United States? 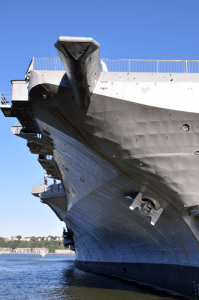 {4:45 minutes to read} The SS United States, a majestic and historic vessel, carried presidents and heads of state during her active duty. At over 1,000 feet long, she is longer than the Intrepid aircraft carrier and set the speed record, called the Blue Riband, between the United States and Europe in 1952. She was originally built to carry 10,000 men over ten thousand miles. With the advent of accessible air travel in the late 60s, however, long distance sailing became obsolete and the SS United States was retired.

A few years ago, the SS United States Conservancy was able to extend the life of the ship thanks to a grant from philanthropist Gary Lenfest. Since the late 90s, the ship has been docked in Philadelphia with the intent to transform her into a new tourist attraction, targeted to the East Coast Marketplace – a project I also worked on. The challenge, though, has always been to find a development partner to help save this national treasure from the scrap heap:

The Conservancy has done everything it can to finance the $60,000 monthly maintenance cost, including selling non-critical items from inside the ship. If somebody is not willing to step up to help cover the cost, then the Conservancy may ultimately be forced to scrap the “Big U.” With all the manpower involved in saving this floating icon, seeing the ship be reduced to scrap metal would be tragic to say the least.

There is a potential development partner that has begun drawing up alternative uses for the ship. The question is: Will there be enough time to have things in place before the vessel is condemned to the scrap heap? With a looming deadline of October 31, 2015, the Conservancy has engaged a broker to start discussions with salvage companies who would come in and scrap the ship. There would be some value as scrap, but all the history would be lost in the process.

In a recent New York Times Article, a potential site for the vessel in Brooklyn was mentioned. This move would require towing her there from Philadelphia. The preferred spot is where she was originally docked, on the west side of Manhattan, south of where the USS Intrepid and some other attractions are today. This would be a great spot for a special event venue and hotel.

It’s a lot easier, however, to build something from the ground up on land that doesn’t move with the tide than it is to retrofit an old ship. This type of project would take a special kind of person who can “think outside the box” to find a solution that makes economic, as well as historical, sense.

My hope is that the SS United States Conservancy will receive a reprieve and that through their efforts they will find somebody willing to invest another half million dollars to fund the ship for another year while a long-term solution is sought. Please contact me with questions or comments at ccbattles@newcanaanadvisors.com.