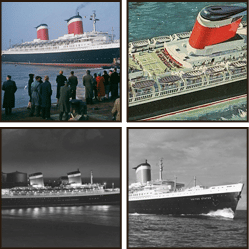 The iconic transatlantic cruiser, the SS United States celebrated its 60th birthday last year. Built at the height of the cold war with a conglomeration of federal and private money, the SS United States was designed to accommodate up to 10,000 troops; measuring 1,000 feet long with a slender frame.

Now cleaned out of interior walls – the Big U, as she is called – offers approximately 500,000 sq. feet of re-developable “real estate” space. This is equal to the size of the Chrysler Building on its side. Thus, this is an opportunity for a major East Coast market. Recently the SS United States has found a home in the City of Brotherly Love, adjacent to its historic colonial neighborhoods.

In her day, the SS United States could go 50% faster – in reverse – than the Titanic could muster going forward. Capable of traveling between New York and Europe in record time (3½ days), the SS United States won the distinction of making the fastest transatlantic crossing of her day; this earned her the Blue Riband. Her top speed was kept secret for many years because she was on call to act as a US troopship at any given moment.

Every time the United States returned home to New York, it was an event. Based at Pier 76 (36th Street near the Jacob Javits Center) she trawled the great Atlantic until 1969. By that time there had been a decrease in global ocean travel and eventually the old dame became too expensive to maintain. She was honorably discharged of her duty.

We want to save this ship. She was acquired by the S.S. United States Conservancy in 2011 thanks to a grant from Philadelphia-based philanthropist Gerry Lenfest. The Conservancy is a non-profit whose primary mission – to save the United States – is dubbed: “Save Our Ship!”

Our idea is to bring her back as a mixed used waterfront attraction. That would include a hotel, retail, restaurants, event spaces and an interactive museum that talks about the history of ocean liner travel. The hope is that The Big U will become a major east coast attraction.

Over the course of the past year, I have been assisting the conservancy in trying to understand how they attract a private development partner to join with them in this venture, with these three questions in mind:

This is a call to action for developers and investors with unique visions for the SS United States to come together to save this great engineering marvel. The conservancy has been talking with a number of groups, but they clearly are running out of time. Money is running low and they run the risk of the ship being scrapped. That, at all costs, is what we’re trying to avoid.