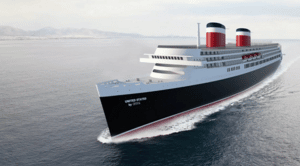 {2:50 minutes to read] The SS United States, a 60-year-old ship that holds the Blue Riband speed record between the US and England, has been slowly rusting away in a Philadelphia dry dock. In recent years, this national treasure, a once-majestic ocean liner famous in the ’50s and ’60s, was at the point where it was destined to be sold for scrap because of the $60,000-per-month cost of upkeep.

Victory at last: On February 4, 2016, a press conference was held to announce that Crystal Cruises had stepped in and saved a piece of American history. The luxury cruise line plans to redevelop the ship and bring it back as a newly updated luxury ocean liner to add to their fleet.

This refit will bring everything up to today’s safety standards, including all new engines, approximately 400 suites, all modern amenities, and a luxury spa while maintaining the ambience of the original SS United States. The project is estimated to cost in the range of $800 million dollars, ten times more than when the ship was originally built in the 1950s.

Crystal Cruises will spend about a year working out the details of reimagining the ship. During that time, they will cover the monthly expense for its upkeep.

A few years ago, I was tasked with helping the SS United States Conservancy find places they could bring the ship in order to convert it into a new waterfront attraction, which would have included dining, a museum, and perhaps lodging or space for incubating new businesses below deck. Having the ship put back into full-time service is an even better solution because folks will be able to enjoy and experience a piece of our history in action.

It’s great to see something that I’ve worked on moving to the next stage. It’s also a great example of what I often tell people: “The things they dream up in the middle of the night, I help bring into the light of day,” otherwise known as unlocking your vision and creating value.

To learn more about the renovations set to take place for the SSUS, click here. If you have any questions or comments regarding this project or vessel, contact me today at ccbattles@newcanaanadvisors.com!