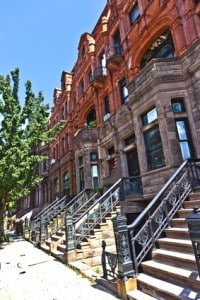 Harlem is a mélange of old and new. Famous for countless historic brownstones and one former president, the neighborhood is in the midst of a second renaissance. Old buildings that have fallen into disrepair are being reinvigorated, while new structures are being erected, enticing residents from all of New York’s boroughs to relocate to Manhattan – the city within the City.

Many people point to Bill Clinton’s choice of offices at 125th St. as the impetus of the new Harlem renaissance. With so much potential residing in the neighborhood, I can’t help but feel like President Clinton’s offices may have been a shot in the arm – but the neighborhood would still be thriving, with or without the Secret Service detail.

I have been working in conjunction with Alexis McSween’s team at Bottom Line Construction & Development, LLC (BLC&D) on one such residential project in Harlem. Part of our challenge has been to navigate the changing dynamics of this legendary patch of land in upper Manhattan, including how housing trends are impacting its viability. I originally met a broker who introduced me to a developer, who needs alternative financing.

Some of the questions we have been faced with include:

The next challenge that was considered was whether or not to pre-sell the units or wait to see what the market could do upon opening. Real estate tends to lag the actual economy by anywhere from 12 to 18 months. An example of that is when a company starts shedding their employees and doing layoffs, then after a while they say, “I have to get rid of some of this space.”

This led to a practical discussion about the selling price and how much of the property do they want to pre-sell vs. waiting for the market – which is tending to drift upwards now. There is a bit of a trade-off: with pre-sold units, the bank is happier because they know that more of the money is confirmed – but if you wait you could possibly earn more per unit (especially in an upward trending market).

Rather than knock down, these are all ways to re-imagine and potentially repurpose a historical area. How do you think the NYC residential market is performing? What has been your recent experience in trying to acquire housing? Curious about any building developments near you in NYC?