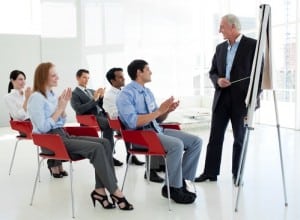 {4:10 minutes to read} In my business, I spend a lot of time attending various networking events.

Sometimes the gatherings are casual and relaxed with the goal of being able to introduce yourself in an engaging way so that the person you’re meeting will continue chatting with you. Other times, it’s more formal interactions; this is the case for one networking group I belong to called Gotham Networking, where the philosophy is “it’s better to give than to receive and what goes around comes around.” Such a group is based more upon building long-term relationships with fellow members rather than people just asking you for contacts and how you can help them get to the next opportunity.

The New York Times recently published an article about networking called How Not to Be a Networking Leech – Tips for Seeking Professional Advice. It discusses how people need to understand that when they’re reaching out for help from those of us in business – whether they’re wanting to change careers, get help with business development, or need general advice – networking is a two-way street.

At a breakfast networking meeting I attended last week, people wanted to know the most effective way to get new business, and the answer, overwhelmingly, was personal referrals. Having someone you trust give a recommendation makes a huge difference in helping find a resource who fits your style, budget and timeline. In fact, without some kind of “warm” introduction, you could spend days trying to pick the ideal candidate to complete a project for you.

It also makes it much less stressful. I think people underestimate the power of the networking. There’s many times when I can look back through the contacts that I’ve met in the past quarter and find 75 new people that I’ve interacted with, either at a conference, at an evening event, or when I was out doing business. A number of these new contacts could lead to new business down the road.

When I attend an event, I try to make 2-3 good connections that I can follow up with. One of the things I have found most powerful is sending a personal written note to those new contacts, rather than an email. I find those contacts pay more attention and we start out on a positive foot. The same principle works for online networking, on websites such as LinkedIn.com. If you’re going to send a LinkedIn request, spend a few minutes to personalize it. Just because there is a computer buffer doesn’t mean the same networking rules shouldn’t be applied. Make sure you are consistent in your approach to build a lasting connection.

The best way to expand your business organically is to make connections without selling; build genuine relationships. Be respectful and sincere when you set out to network and remember: don’t be a leech! Share your networking tips or ideas in the comment section below.